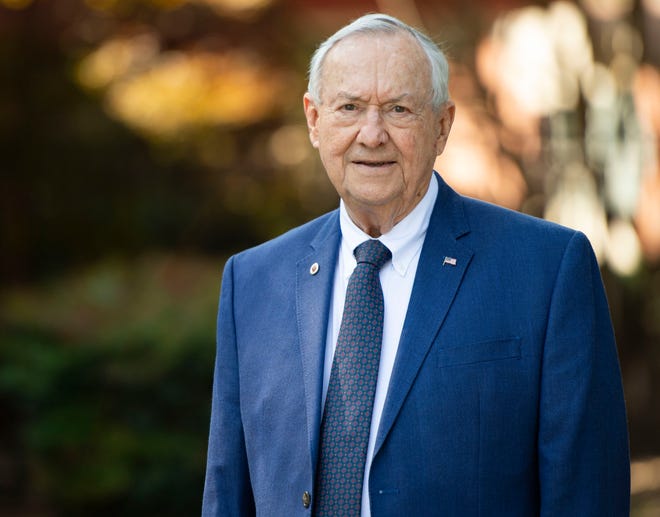 He and his (late) wife, Gloria, had long given “nominally” to the organization, but a tour of Salvation Army facilities in Greenville opened Stovall’s eyes to “everything the military has done. And the “different ways they help people.” “

He has gone beyond being a dedicated volunteer. Stovall is considered by The Salvation Army to be a community hero and he is honored as such.

The program is our way of recognizing the generous, noble and selfless work of those of us who work tirelessly – often behind the scenes – to make our community a better place.

Stovall was nominated for the Community Hero honor by Liza Jones, on behalf of the Salvation Army. “His passion and dedication to serving others in the community is an inspiration to all who know him,” said the letter of appointment.

Stovall has been cited for serving as a member of the Salvation Army Advisory Board since 1991, including a stint as Chairman of the Advisory Board. He was also part of the Kroc Center fundraising leadership team, which helped bring the Ray & Joan Kroc Center to Greenville, according to the letter.

He and his late wife have volunteered in many different roles with the Salvation Army, including taking school-aged children to buy essential back-to-school supplies before the start of each school year, the letter said.

In 2019, Stovall, a retired environmental engineer, even took on the leadership of coordinating the ringing of the Taylors First Baptist Church bells group for the Salvation Army’s Red Kettle campaign over the Christmas holidays. .

“He was responsible for ensuring that every volunteer spot was filled during the four-week, 6-day-a-week bell operation, which raises funds for work on social issues that the Army Salvation is performing throughout the community, ”the letter said.

In December 2020, Stovall was hospitalized due to illness. Despite his medical condition, Stovall still found time to call and make sure each of the bell-ringing volunteer positions was covered, according to the letter.

Stovall said he has long supported things with his time and resources, “where people have had the opportunity to be helped and to learn more about Jesus Christ.”

“It is the mission of The Salvation Army, to take care of people and share the love of Jesus with them,” he said.

When Stovall learned he was being honored for his work helping the organization, he thought of a couple of other people he would have voted for instead.

Stovall thinks that “those who have been given more expect more.”

“From a scriptural standpoint and just from a human standpoint, I think we’re supposed to help others,” he said. “While we cannot help the people in the shelter directly or the people who receive gifts from the military on Christmas, we can certainly help indirectly. “

He’s been doing this for 20 years now.

Born in Elberton, Georgia, Stovall learned through Scouting how to help others. He gained more knowledge by attending ROTC at Clemson College (which became a university in 1964).

Stovall said his entire class of graduates participated in the Korean War and that he was “fortunate” to work with the Army Corp of Engineers.

“We built a 500 bed hospital and three or four years ago I found out that it still exists and is still in use,” he said.

Stovall then went to Georgia Tech to get his graduate degree in Environmental Engineering. He worked for an international paper company for 15 years before coming to Greenville to work for an environmental consulting company.

He retired as senior vice president of Rust Environment and Infrastructure in 1995.

He was still working there when he was one of a small group of business people invited to visit the Salvation Army. The organization was looking for young people to sit on the organization’s board, he said.

“I was 61 at the time and I was like, ‘Am I a younger person? Said Stovall. “It turned out to be a great opportunity. “

“I was just amazed at the quality of the people in The Salvation Army,” Stovall said. “They have all been great people and all of the people who work here work here because it means something to them. Probably not the top salary, but these are people who care about helping others. I just feel privileged to be a part of it.